It's a new year and time for a new post!

The end of 2015 was so crazy I didn't have a chance to write about everything that was going on, so here's my official recap. It's going to be an honest post, and I'm going to reveal a glimpse at my writer-neuroses that I think most writers will relate to.

So, the biggest thing to happen was that WARREN THE 13TH AND THE ALL-SEEING EYE was released on November 24th, right before Thanksgiving. 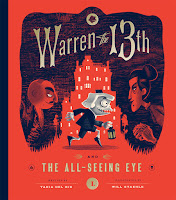 It was such a whirlwind - and pretty surreal. I think I was walking around in a haze for the first week after its release. Actually seeing it in stores for the first time felt like a dream. Like, How did this get here? 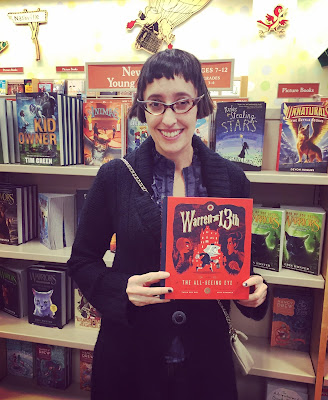 We got some amazing recognition: Amazon featured it as one of their Best Books of November, and it was the #5 pick on the Top Ten Kids' Indie Next List for Winter 2015. 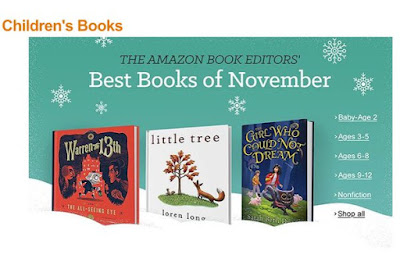 Despite these accolades, realizing that the book was finally out there for people to buy and read was more than a little intimidating. Many authors have warned against the perils of reading reviews because it's a slippery slope - you read some good ones that boost your ego and make you feel great... and then comes your first negative review. And suddenly it doesn't matter how many awesome reviews you have. All you can think about is that one awful review where some random stranger ripped apart your work.

It's almost laughable how easy it is to read one bad review and make the leap to feeling like you're the worst writer to ever walk the planet. I felt myself going down that rabbit hole, so I did my very best to avoid reading reviews after a few initial peeks after the book was released. I really do appreciate readers sharing their opinions the book, and I'm thrilled that so many people have given it good ratings on Goodreads and Amazon... but I've learned my lesson about opening that Pandora's box!

I'll still read professional reviews posted by certain places, such as Kirkus, Publishers Weekly, and the New York Times (all who gave positive reviews to the book! AHHHHH!!). Not only that, but WARREN has just received a STARRED review from the School Library Journal!!

The main thing is, the book is out there. It can't be changed. People will either love it or not and I can't control it either way. There is a serenity that comes with letting go of the outcome... but that's easier said than done.

I also had an amazing launch party with Will Staehle at Vroman's book store in Pasadena on November 30th. We set up a snack table with a Warren the 13th standee cut-out and had a Keynote presentation and live reading planned, as well as a raffle with lots of prizes. 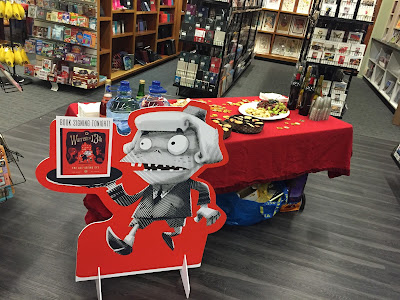 The event started at 6pm on a Monday which, as anyone familiar with Los Angeles traffic will tell you, is the WORST time to have an event. Not to mention that Pasadena is pretty far east for a lot of people living in L.A. Needless to say, at 6pm the room was virtually empty. I've heard many a horror story about authors showing up to book events where no one was in attendance, and I began to fear this might be the case. We waited until about 6:20, but only a few people had trickled in by then. 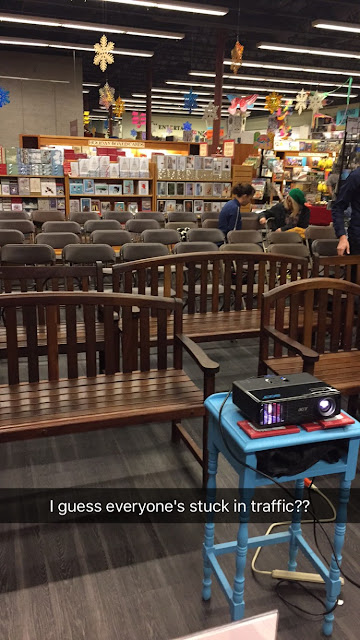 We had to get started anyway, so we did. We went through our slide show introducing the book concept and the characters and then I began reading a section from the book with the assistance of my actor friend, Mat Lageman (who provided some hilarious character voices!).

And something amazing happened. As soon as I finished the reading, I glanced up to realize that the room was completely full! In fact, all the seats were filled and some people were even forced to stand in the back!

Will followed with a funny look at the torturous process of designing the cover, and then we had a Q&A with some great questions from the audience. 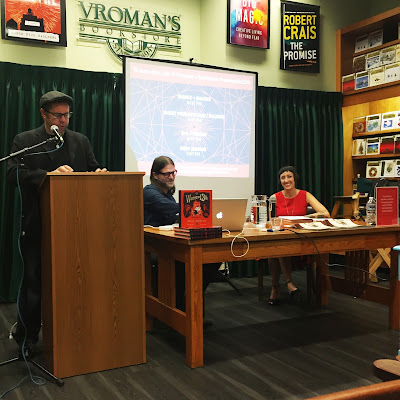 Afterwards, we began the signing and raffle. And guess what? We sold out of all 50 copies of the book that Vroman's had ordered. The signing line stretched to the back of the room. It was incredible - especially since I got to see so many old friends who showed up to show their support.

I never felt so much warm, glowing gratitude as I did that night. I felt like the luckiest person alive, supported by friends and strangers alike to celebrate the result of a dream that I've harbored for years - to write a novel and have it published and widely available.

I was still riding my high as the holidays approached in rapid succession - Thanksgiving, and Christmas, and New Year's Eve. And with it, traveling to see family while also trying to finish revisions on Book 2 (which is currently almost twice as long as the first book!).

And now here I am on the other side of 2016. Things have died down a bit. My book's been out for a little over a month. My second book revisions are with my editor, awaiting notes.

...And I think I'm fighting a case of the post-publication blues.

I know. I know. How is that even a thing? Before I was published, I would read accounts from other authors going through this very thing, and I remember thinking, "I WISH I had that problem. At least they HAVE a book on shelves, which is more than most people ever get."

And it's true... it's a very first-world problem. One that I honestly didn't think I would allow to affect me.

Shortly before my book's release, I went to an event where I mingled with some local authors. One of them kindly told me to enjoy it, but warned me not to get my hopes up too much. She said that a book release is like a wedding where you're marrying yourself. There's all this anticipation and buildup leading up to the big day where YOU'RE the star... and then... it's over. The book is out. New books will be out the following week. And more books the week after that. She said it was easy to pin too much onto your book and feel adrift with despair when the buzz dies down and your book doesn't do as well as you'd hoped.

I listened to her advice and thanked her for it... but I admit, it didn't really sink in. Because I was still in the anticipatory stage of my pre-release, that magic time where anything was still possible. There have been so many people, both strangers and friends alike, who have said, "this could be big" in relation to WARREN that I really believed it.

In fact, I still do.

Because I do believe in what Will and I have created. I'm incredibly proud of it. I think it IS special and still holds a lot of potential.

The thing is... how do we reach all the people who have yet to discover it? One of the struggles that we've had is in reaching our intended audience: middle school kids. They're simply not online as much as older kids are, in part due to the strict COPA laws that exist to protect kids on the internet.

I'm not sure I know the solution, other than Will and I trying to set up school and library visits where we might be able to interact with kids one-on-one. On the plus side, I have been having fun chatting with young readers on the COPA-compliant site, DOGObooks, which is a start!

So, yes, my buzz has worn off. I'm realizing the book isn't an instant best-seller the way I envisioned it might be. New books are coming out and everyone's looking forward to what's next for 2016. (On that note, I'm anticipating the release of my friend Paul Krueger's wonderful book, LAST CALL AT THE NIGHTSHADE LOUNGE, which comes out in June!)

So... how to fight through this self-manufactured doubt? The main piece of advice I've heard repeated is to KEEP WRITING. No matter what.

On submission for months on end?

Awaiting notes from an agent or editor?

Book's out on shelves?

So that's what I'm doing. I'm writing new stuff. I have a couple projects I've started recently... one is a YA fantasy that's been percolating in my mind for some time and I feel like it needs to come out. Another is a MG adventure for girls that I've been excited to write too. I'm also wrapping up a horror short that's pretty weird, but a fun departure from what I normally do.

I'll share more about all these as I get further along, and I'll update you with anything new regarding the Warren series.

In the meantime... I'm going to keep doing the only thing I can do: 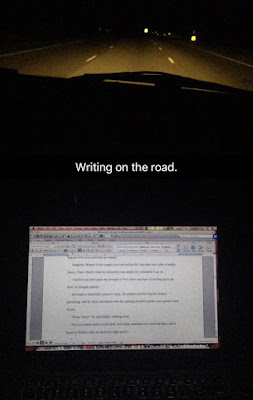