Woo hoo! I can finally reveal the title of the book I've written for Quirk, as well as the synopsis! I've been bursting at the seams for what feels like forever to share this - especially since Will Staehle and I first conceived of this project over 10 years ago!

WARREN THE 13TH and The All-Seeing Eye

Meet Warren the 13th, a cursed 12-year-old Victorian bellhop who’s terribly unlucky . . . yet perpetually optimistic, hard-working, and curious. Orphan Warren’s pride and joy is his family’s hotel, but he’s been miserable ever since his evil Aunt Anaconda took over the management. Anaconda believes a mysterious treasure known as the All-Seeing Eye is hidden somewhere on the grounds, and she’ll do anything to find it. If Warren wants to preserve his family’s legacy, he’ll need to find the treasure first—if the hotel’s many strange and wacky guests don’t beat him to it! This middle-grade adventure features gorgeous two-color illustrations on every page and a lavish two-column Victorian design that will pull young readers into a spooky and delightful mystery.

The final cover is still being designed and illustrated by Will, but it's looking awesome so far and I look forward to sharing that as soon as I can! Oh, and mark your calendars because the book is set to be released on November 24th!

I realize it's been a while since I've posted. Time flies when you're busy! I've been itching to give an update on my middle grade novel for Quirk Books, but it's a little tricky as the project is still under wraps at the moment. I can't wait to reveal the title, which I believe will happen very soon!

Buuuuut here's a little hint in the meantime ;) : 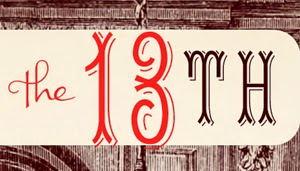 As I mentioned previously, I'm collaborating with illustrator and designer, Will Staehle, and we have a phone meeting set up with Quirk's marketing team next week. I'm looking forward to this because it means we're going to start the process of book-promotion before long! Woo!

The manuscript is just about done and ready to go to - after cranking out the first draft during NaNoWriMo, I've been spending the last few months doing revisions. The downside of rushing to complete an entire novel in the span of a month means that it isn't going to be perfect. It also means MANY revisions/tweaks are needed to transform it from a first-draft to a polished manuscript fit for publication.

I've going back and forth with Quirk publisher/editor/man-of-many-hats, Jason Rekulak, to make the story as tight as possible. This has been my first time working with an editor who is so hands on, and it's been a wonderful learning experience. Jason is a writer and author as well, so his insights have been really valuable. It actually reminds me of being in a writing group, which I was until recently (sadly, it disbanded because, life).

There's still been the pressure of a time crunch because Will is going to need as much time as possible to do his portion of the book if we want this to be released on schedule. You see, it won't just be a novel with a few spot illustrations - this is going to be a really cool looking book with a unique interior design and lots of art! If you look through some of Will's other design projects, you'll have some idea of what he's capable of! But Will can't get fully started on his art and design duties until the text is 100% complete - and we're very, very close! The final manuscript should be wrapped up within the next week or so!

Watch this space, because once we get going with marketing and promotion I'll be able to post a lot more! I can't wait to share more of this project with you guys! :D
Posted by Tania del Rio at 5:13 PM 3 comments: